Charlie Villaroman is a personal trainer at Virgin Active, Kensington. He draws on more than a decade of martial arts experience to train his clients. Zoe chatted to him about common martial arts injuries and how to avoidnthem.

Zoe: How did you get into martial arts?

Charlie: I started with Olympic-style taekwondo in 2005, which is mainly a kicking style. There are many variations and techniques even within taekwondo. But if you have a bad technique it’s pretty easy to injure yourself and I blew out my ACL in 2008. No more competitions and lighter training for me.

That’s when figured I needed to try different things. So, I decided to look at other types and techniques. It was just at the time when mixed martial arts was becoming popular and I decided to delve into it. I started with Brazilian jui-jitsu, which is a grappling style martial art. As I slowly got back confidence in my knee, I started doing Muay Thai. Although I added elements of taekwondo in there.

Zoe: With your clients nowadays, you do more Muay Thai and kickboxing. What do you find are the more common injuries with beginners?

Charlie: It depends on the type of client. Some of them want to learn how to kick and have already done some boxing. Some want to learn it all. So it depends on what they already know and what they want to focus on. The most common injury with boxing and beginners is of course wrist injuries.

Most of my clients only see me once a week, sometimes twice. The majority of the time wrist injuries happen when they’re practising on their own between sessions - when I’m not around to correct issues with technique. The problem comes when they’re bending their wrists as they throw the punches. Then they put a lot of pressure through the joint, and that’s when the injuries happen.

Another common one is a sprained ankle, when you start with the footwork. They roll over it. That’s usually quite quick to recover from though.

There are freak accidents sometimes though. Like me rupturing my ACL. These usually happen at a competitive level though.

Zoe: What tips do you give to people to avoid getting these common injuries?

Charlie: Technique is paramount. That’s what you always have to think about. I’ve done different styles in the past, where I’ve been part of a whole class or team. Then training is all about explosive movements and repeating them. You’re focused on speed. Then it’s hard to make sure your technique is right. That’s why I encourage people to get some one-on-one training. Because speed comes from practice.

If you want to practise, in front of a mirror and do the movement slowly. Think about the details of the movement. Focus on one aspect of good technique at a time.

So, for a jab you might start by focusing on reaching, then you go on to focus on pivoting the shoulder, explosion, power and speed. Your body’s not going to get it all at once. Build it up step by step.

Then when you’ve got that movement perfect, you can build up speed and power. It will come. Then your muscle memory can play its role.

A lot of people just want to be fast and powerful. But you’ll be more prone to injury if you’re always doing explosive movements. Break it down. Yes, it might take longer to do it that way. But doing it little by little is actually easier. It’s like learning how to dance. You have to learn the steps to get it right.

Zoe: How important is it to have the right equipment? The right wraps and the right weight gloves?

Charlie: That really depends on the trainer and your goals. If you’re doing martial arts to get fit and aren’t so focused on power, then it’s less important than if you’re going for power. Then how you wrap your hands and the padding in your gloves becomes much more important.

When you’re doing kicks in Muay Thai though, shin guards are good to have when you’re learning technique. 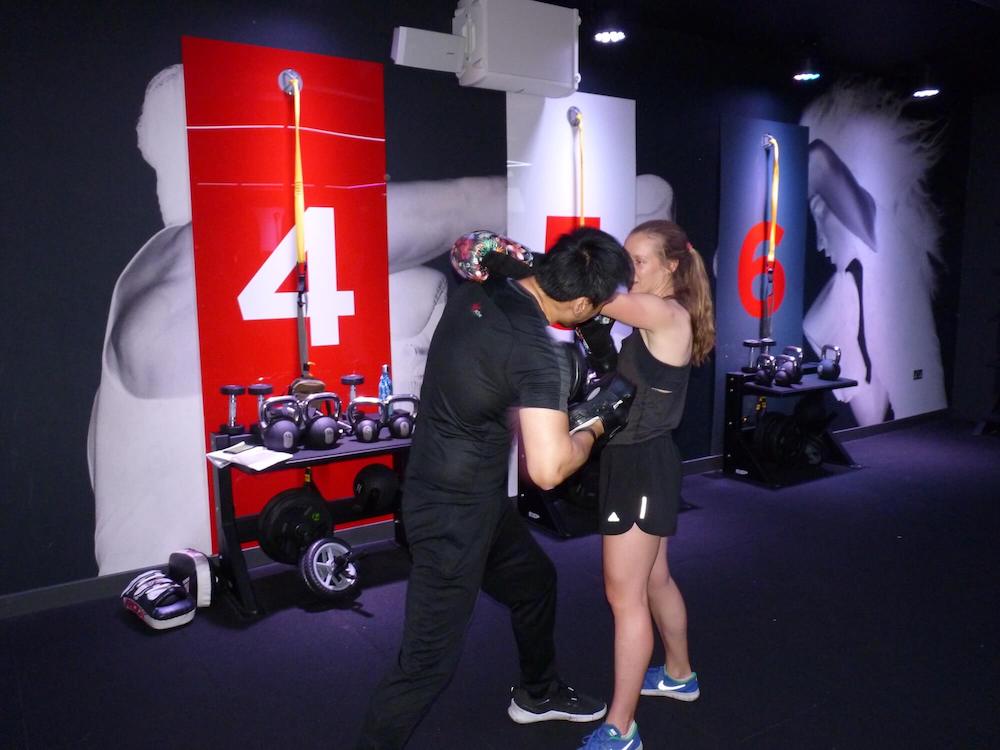 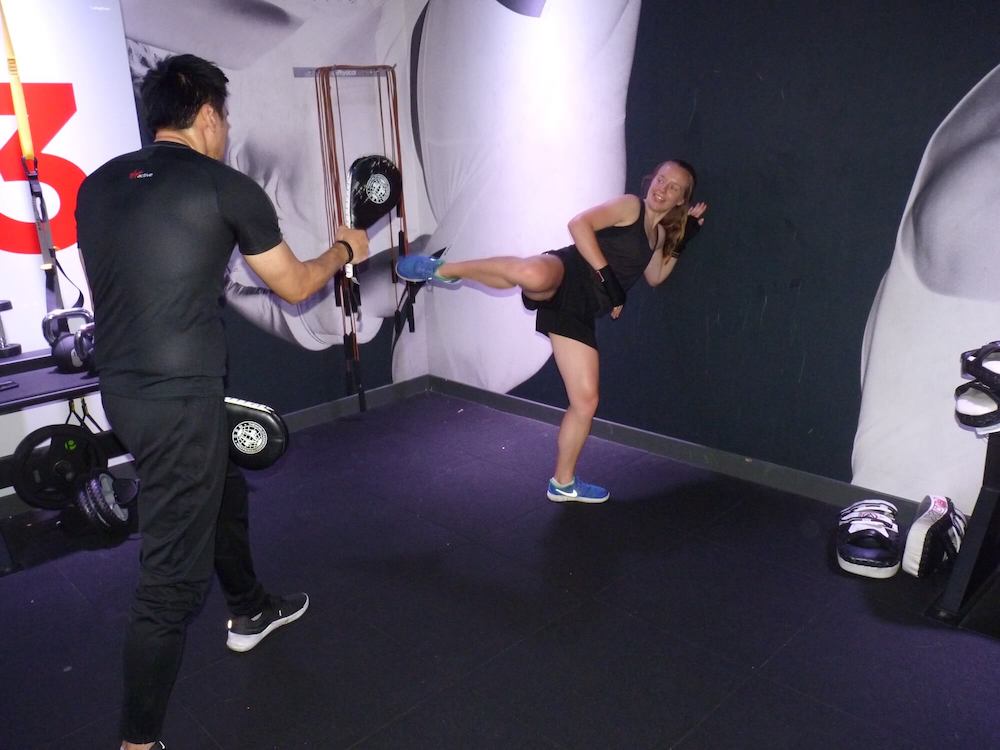 Zoe: What do you tell a client is the best way to avoid injury?

Charlie: Practice. That’s all it is. Like they say, you need to devote 10,000 hours to master something. That’s what it is: time to practise. As I said, you can pick up bad habits when you train on your own though. And in a one-on-one session, a client wants to get what they think is their money’s worth, so they don’t want you to spend too long explaining techniques if they’re doing things incorrectly. They want to leave the session sweaty and tired. I get that. But it’s important to get it right. If you keep going the wrong way, it’s going to cut your journey short anyway.

Zoe: After each session you give me “homework”. How important are those drills in avoiding injury?

Charlie: Very important. They’re not drills of the actual movements. But they’re drills that will strengthen the muscles, that will correct your form in a safe way. When you’re moving and you move through a strike – a kick or a punch – you’re often using momentum to do the movement and generate power. But you can also use that body weight to compensate for certain muscle weaknesses you have. If you don’t correct those muscle weaknesses, you’re more likely to get injured. And stronger muscles will improve your technique too.

Zoe: What is your typical training regime? And what regime would you recommend for martial arts?

Charlie: Again it depends on your goals and it depends on the martial art you want to do. When I was preparing for a competition, I would do two two-hour sessions a day, six days a week.

If you really want to improve and learn then you probably want to get instruction more than once a week. Because there’s a lot to learn if you want to get into a technique.

I usually do advise my clients to do something low impact on at least one day if they’re training intensively. So swim, or do pilates or yoga. Increase your core strength and flexibility instead.

Zoe: How important is non-martial arts training if you want to avoid injuries? Strengthening and conditioning?

Charlie: As you know, martial arts are explosive. But they’re all different too, and every coach has different views.

But there’s the other side too. There’s a sports strength and conditioning team in the US lead by Marv Marinovich. They’re known for their strength and their conditioning, and they work with professional athletes. Because professional athletes already know how to fight, they believe the difference between them is then in their conditioning. Because it doesn’t matter how good you are, or how good your technique is, in a professional fight, if you run out of gas, everything goes out the window. So, for them conditioning is the most important part of it. They do a lot of plyometrics and other techniques to improve endurance and explosiveness.

So, it really depends on what your strengths are already, what martial art you’re doing and what your goals are.

Zoe: What advice do you give to your clients who are coming back from injury?

Charlie: There are people who go hardcore. And I like that. I like working with them. But there are those who go overboard, who ignore existing injuries, or ignore advice from professionals – their physios or their doctors. There’s a reason for the advice. Follow it, or you’re putting yourself at a greater risk of re-injury or picking up a new injury.

In a martial arts gym, you can’t always go light after an injury. Because it depends on your partner. Ego plays a big role in combat sports. So even if you’re just training, it can be hard to stop yourself or your partner from pushing hard.

So, it’s important to put yourself in an environment that supports your return to training. Or to train with people you can trust to go light. But only if you can do it too.

That’s why one-on-one training is usually a better option if you’re coming back from injury. It’s more controlled.

Listen to your health professional. Do your rehab. Then come back slowly.

Zoe: Are there any martial arts-specific warm up routines you advise clients to do?

Charlie: The traditional martial arts styles often have old-school methods of stretching. And yes, they do work. For example, when I started with taekwondo, we’d do 15 minutes of static stretching at the beginning of a training session and a stretch cool down at the end, which was the same thing, but less intensive. And that’s how I developed my flexibility.

Later I realised that was doing it the wrong way round. It was like stretching a cold rubber band. It’s better to warm up first and then work on your flexibility to avoid muscle strains. It does depend on what you’ll be working on in the session. But you shouldn’t start with the static stretches, start with dynamic stretches.

If you have any questions for Charlie, send them to info@physiomotion.co.uk and we’ll pass them on to him. Or if you’re struggling with a persistent sports injury that’s stopping you from practising martial arts, get in touch.