Are you ready for CrossFit?

Although CrossFit is often described as being for everyone, we regularly see CrossFit injuries and wanted to find out why.

PhysioMotion physiotherapist, Anjulie van den Berg spoke to CrossFit London Head Strength Coach Alex Miller to find out who CrossFit’s really for, and how you can enjoy it and avoid injuries.

Anjulie: What is CrossFit and what makes it different from regular weight training or power lifting?

Alex: So, CrossFit, as defined by CrossFit©, is constantly varied, mixed-modal exercises done at high intensity. You keep changing what you’re doing. But that’s not necessarily how we do CrossFit, that’s just how it’s defined.

If you compare it to powerlifting, for example, powerlifting tends to be a very linear process (unless you’re using a “typical” Conjugate Method of training), so you’re likely to spend 3 weeks on one thing then 3 weeks on another thing, then change again, and even then that can be seen as linear from a bird’s-eye view. With every-day weight training you might work on something until you stop getting better, then you change. CrossFit changes all the time to try and avoid any adaptation.

Anjulie: Is CrossFit for everyone?

Alex: I know the line is that CrossFit is for everyone, but if someone comes in with a real intolerance for a type of movement, for example loading the spine, then they need rehab first. If they can’t hold something out in front of them without pain, then they need to see a physio.

If you’re injured, or you can’t move well, then you need to do something about that first. But if you can move well, even if you’re unfit, there will be a level and a progression for you.

Anjulie: Are people screened individually when they come in?

Alex: In our gym, we have a mandatory month-long fundamentals programme that everyone has to take part in when they start. They learn about different types of movements, and they’re coached on them in these sessions.

There are between 1 and 6 people in a session, so a coach can assess how they move, and will flag if they think there’s a reason they shouldn’t be doing CrossFit.

For example, one of our foundation movements is an overhead squat. In doing this you can see a lot of issues, and if it’s necessary we can suggest they go and see a physio. So, they’re assessed/screened as they go.

It would be great if everyone who came into the gym could be fully screened. But my full screen takes 3 weeks. Are people going to pay to be tested for 3 weeks before they can start training? Probably not.

Alex: Although they’re all different, they do have a general structure. You do a warm-up piece, then a skill section or a strength section while you’re fresh. This might involve lower rep sets of things that require high strength or high skill. Things like weightlifting (clean and jerk and snatch, deadlifts, overhead presses or back squats). From there you’d go into structural work, which are your more traditional body building type exercises – so muscle- building exercises. Or into some metabolic piece, like aerobic work. So, while we have a constantly varied session, the structure of it will be similar.

Anjulie: But everyone is at a different place in their training, so how do you accommodate that?

Alex: How I deal with that is to have multiple programmes running at the same time in a session. So, when someone comes into a session I assess them according to archetype movements (basic human movement patterns) and divide them into cohorts. So, for example if you’re doing squats, not everyone is going to be able to do back squats. This is something you need to progress to, so they’ll do a squat movement to help in that progression instead.

Anjulie: How would you suggest that someone who’s new to CrossFit starts?

Alex: Slowly! CrossFit attracts a kind of person who wants to go really hard all the time. And while that intensity-driven model is fun, and it works very quickly, they’re more likely to overdo it. Building up the resilience to put that kind of load on your body is hard. It does take time. You need to be cognizant of this and start slightly slower. Especially if you know you’re that kind of person. 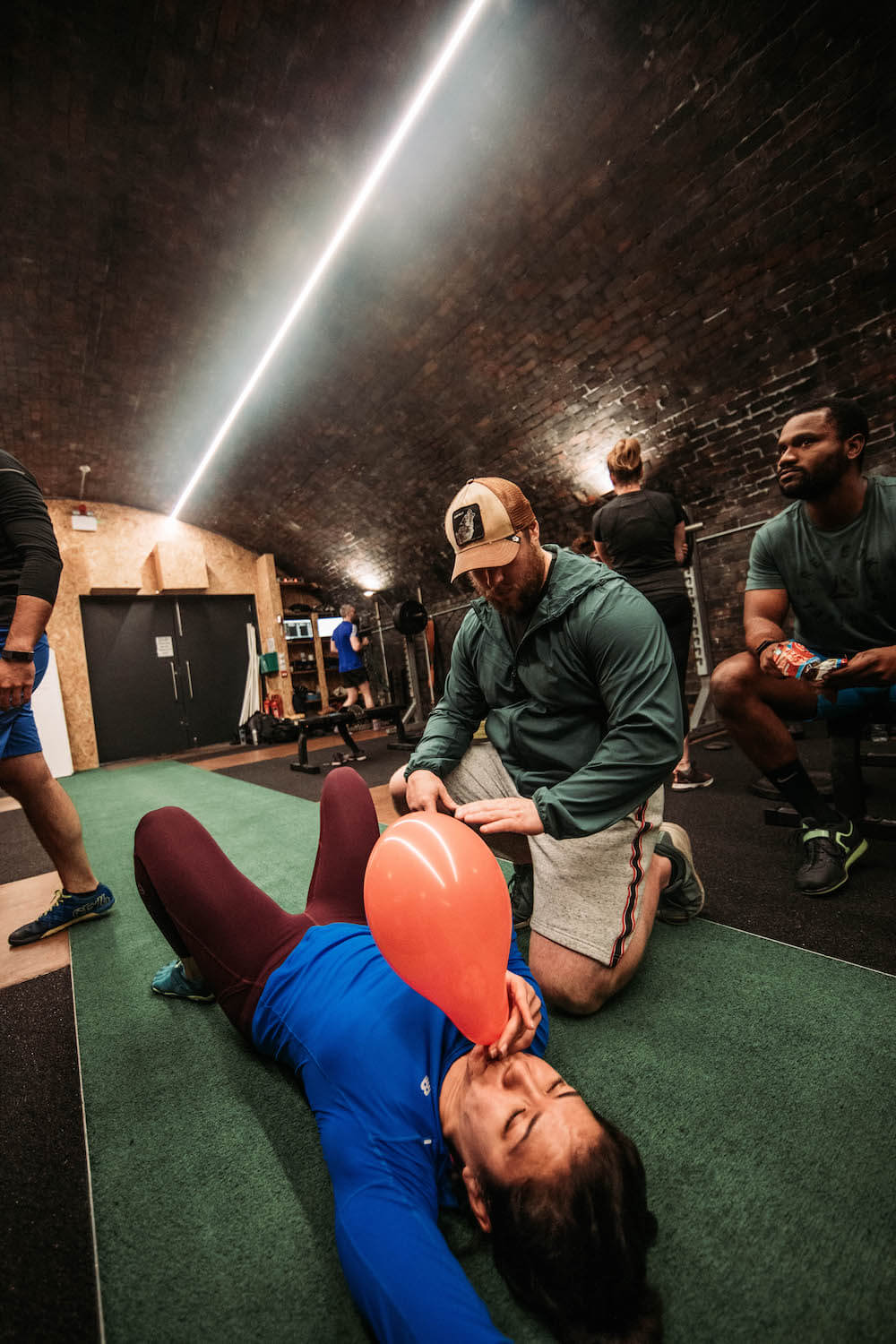 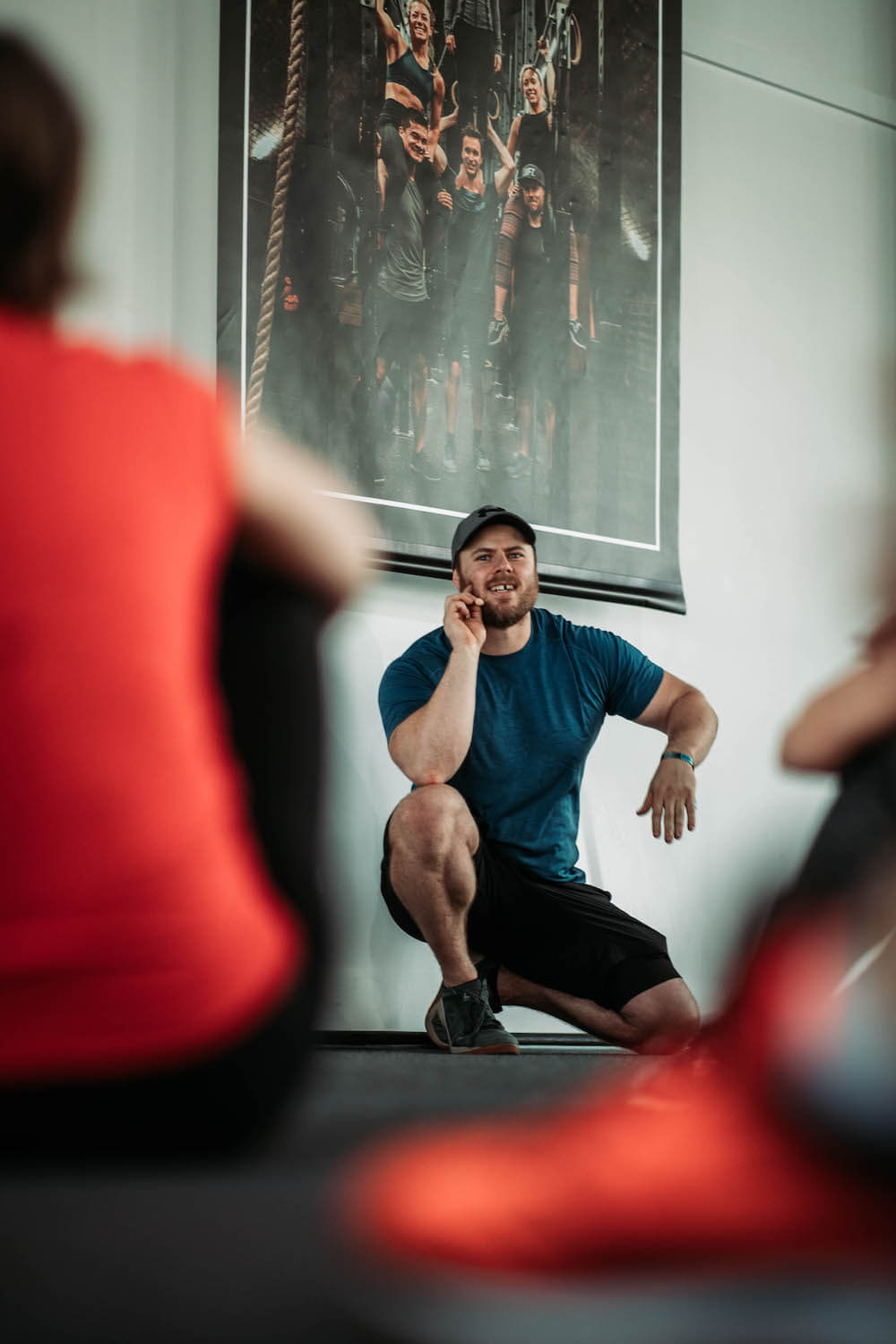 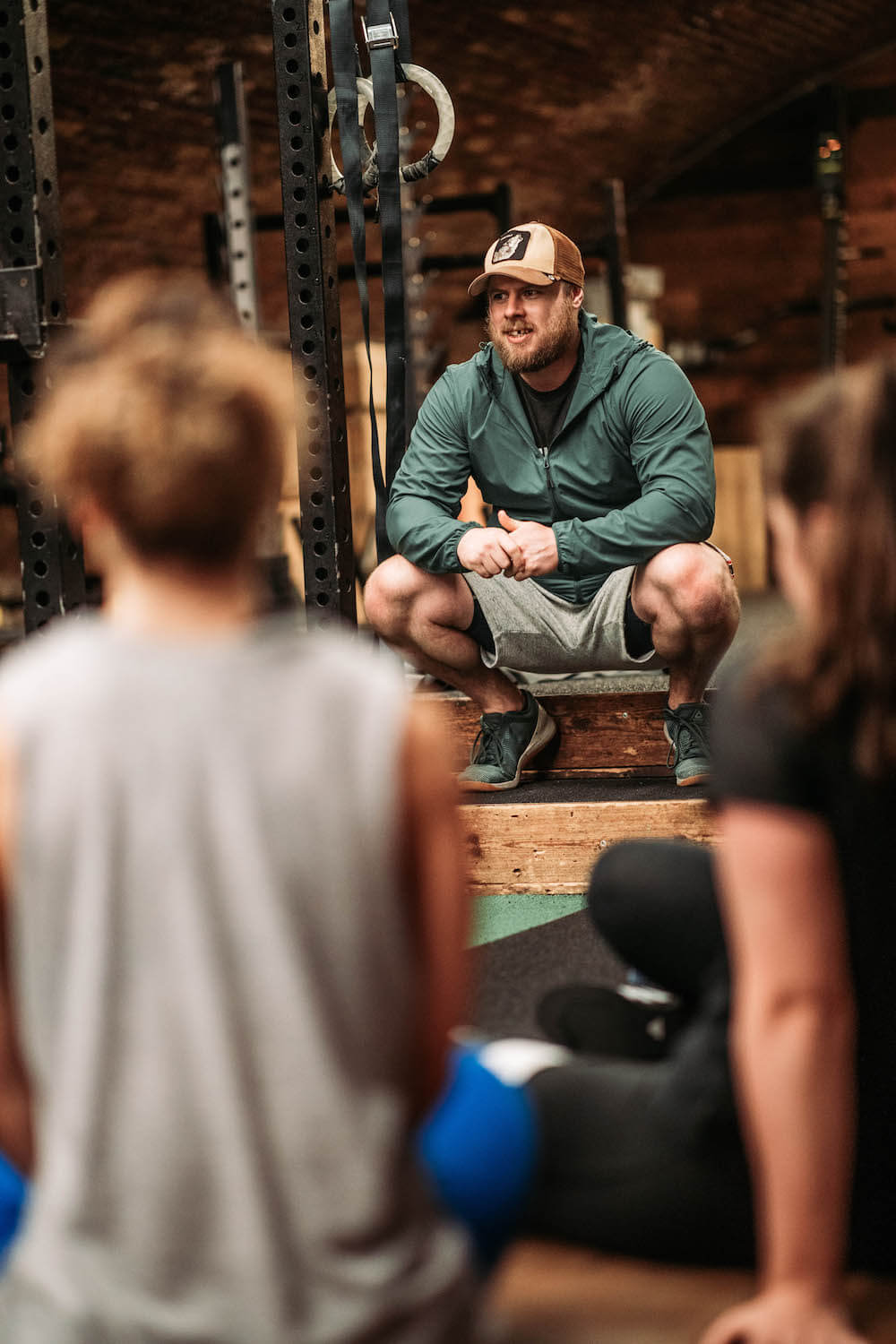 Anjulie: As physios, we regularly see people with injuries from CrossFit. What are some of the most common injuries you see, and why do you think these occur?

Alex: This is a really common issue. CrossFit is biased towards quad-dominant movements and overhead presses, which leaves really important muscles – the hamstrings, glutes and mid-back muscles – lacking. When we start asking people to do work with these muscles, they don’t have the resilience to cope with the required load.

For example, if you’re looking at a hinge pattern, they don’t have the capacity in their glutes and hamstrings to drive the pattern well, and they need the assistance of their quads or lower back. This compensation may lead to loading being placed in tissue where resilience and/or capacity is harder, or at least slower, to build. i.e. connective tissues. So, you see injuries from this. Or with overhead movements, they don’t have the capacity in their mid- back to control the movement of the shoulder blades over the ribs and this leads to shoulder injuries. I see a lot of shoulder issues!

If you look at the amount of overhead stuff in CrossFit, there’s a lot of it. Even in the aerobic exercises. When you’re already fatigued in the aerobic session, you don’t have control of the overhead movements. Shoulders are definitely the number 1 injury I see.

In the fundamentals classes we talk a lot about that – overhead pressing and variations of the movement. It’s down to the individual coach if they talk about scapula control. But it’s not very interesting for some people.

Anjulie: Do you think there’s a way that physiotherapists and trainers could work together to prevent CrossFit injuries?

Alex: For sure! We need a flow between rehabilitation and performance. If we could have physios to talk to coaches about how to carry out the movements safely and prevent injuries, that would be great. How to prepare athletes to do the training without putting their bodies in positions they’re not ready for. Fixing people should always come before any expression of force. Safe movement before high-force movement.

The short answer is yes!

Anjulie: We’ve heard about CrossFit competitions! What do these consist of? How does someone win?

Alex: We run a couple of competitions here at the gym. What they’re trying to test is how fit someone is. And it could be anything. For example, in the recent games competition they had a marathon row to test aerobic fitness, and in the same competition they had a test of max snatch, which is a test of power. The competition could be anything, but usually it tends to be 2 or 3 exercises strung together and who can do the most rounds in a certain amount of time, or who can do a set workout the fastest.

Anjulie: As you do more reps, people’s form often goes off. Are they judged on form?

Alex: In competition the goal is performance rather than health. So purely in a competitive setting, no it’s a case of just getting it done. As long as it fulfils the standards demanded of the movement. For example, if the squat is deep enough. But spinal position or weird collapse in feet or knees won’t be taken into account. It’s sometimes not the best to watch in terms of movement quality.

Anjulie: Do competitors know beforehand what they’ll be doing?

Alex: It depends. In some regional competitions they tell you in advance. For international competitions it’s unknown. Here, we release the competition details a few days before. At the top level, you’re told 5 minutes before. It’s a test of who’s the fittest, who can handle the most of unknown quantities. You’re not training for one specific thing.

Anjulie: To round up, and answer my original question, based on what I’ve learnt today I’d say that: CrossFit attracts a type of person who likes to go hard – they may not always have the patience to spend enough time building up movements. Often these are also people who hold stressful jobs that may be desk-based and this contrast also doesn’t help. Recovery is also equally important, more is not always better, and what one individual needs can be very different from another’s depending on genetic and lifestyle factors.

Our advice? Find a good coach and a CrossFit gym (such as Alex and CrossFit London) where they spend time on fundamentals, and have yourself assessed by a physio if the coach or trainer recommends this, or if you start having even little niggles. This will prevent any more serious injuries and help make you a better athlete!